When joining an external table to a spatial layer in ArcGIS, you must… 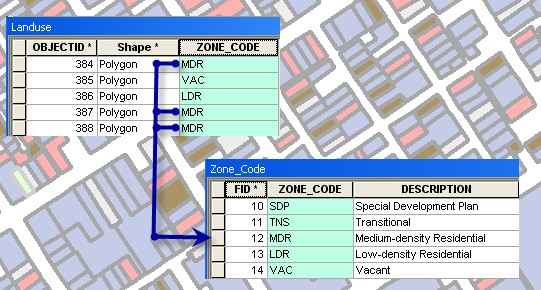 You may NOT perform a ONE-TO-MANY join – can’t join many external records to one feature.

When your (spatial) layers on your map don’t share a common attribute field, you can join information using a spatial join.

Join by location, or spatial join, uses spatial associations between the layers involved to append fields from one layer to another. Spatial joins are different from attribute and relationship class joins in that they are not dynamic and require the results to be saved to a new output layer.

One of three types of associations, described below, can be used to perform a spatial join:

For example, if you select a building, you can find all the tenants that occupy that building. Similarly, if you select a tenant, you can find what building it resides in (or several buildings, in the case of a chain of stores in multiple shopping centers—a many-to-many relationship). However, if you performed a join on such data, ArcMap will only find the first tenant belonging to each building, ignoring additional tenants.

Ggeneral guidelines when choosing between joins and relates on your data: