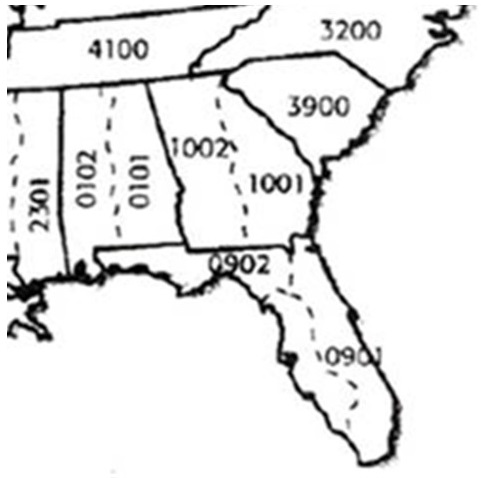 Make sure to review last Wednesday’s ‘Defining the measurement surface, GCS, & PCS’ lecture and make sure you read the pages in Bolstad I listed at the top of last Wednesday’s lecture. If you are still confused, view the NOAA Digital Coast page I linked last week.

Five opportunities to interact with coordinate systems in ArcMap…

This is the coordinate system that was used when creating the data.

If you have a layer with an ‘Unknown Spatial Reference’ (an ArcMap pop-up will let you know if this is the case), you should use the DEFINE PROJECTION tool. This tool does NOT change a layer’s coordinate system and it does not create a new layer; this tool only changes the associated metadata so ArcMap can correctly display the data.

When performing an analysis, you need to ensure all of the inputs are cast in the same coordinate system. The PROJECT command to ‘mathematically transform data from one coordinate space to another’. This command does create a new layer so you should use a smart naming convention.

The above rule of thumb also applies to raster data. If you are performing a raster analysis, you need to ensure all layers are cast using the same coordinate system. Use the PROJECT RASTER command to mathematically transform your rasters from one CS to another.